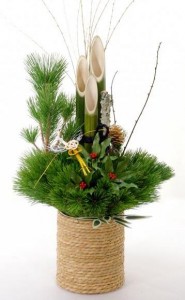 The period of the 1st, 2nd and 3rd of January is called “Oshogatsu” in Japan. New Year’s Day is called “Gantan”, which means “the beginning of the day”. During Oshogatsu, families gather to celebrate the New Year, usually at the grandparents’ house. Children get pocket money from their elders – it is called “Otoshidama”. And the Post delivers greeting cards; this is “Nengajo”. Japanese people, at this time of the year, spend countless hours preparing and sending greeting cards indeed.

Japanese people used to count their age at Gantan; on the 1st of January all were thus gaining a year – this was “East Asian age reckoning”. This is also why celebrating Oshogatsu used to be a very important custom. 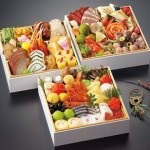 For housewives, Oshogatsu are the days when they are supposed to be relieved from house duties. In order to anticipate that well-deserved rest, they prepare preservative food by the end of December. This type of preservative food is called “Osechi”. “Osechi” isn’t only tasty, it is also very beautiful to the eyes. Nowadays Japanese gradually abandon making “Osechi” themselves. They often buy it in department stores or restaurants. There are still a lot of kinds of “Osechi” during this holiday season, but at the same time good and old tradition has seemingly gone. 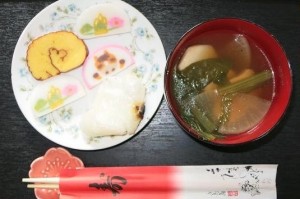 Ozoni and other treats for Oshogatsu

“Ozoni” is also standard food for Oshogatsu. Ozoni is made of Mochi (rice cake) and soup. The style of Ozoni is very different from region to region. Usually people pride themselves with making their own, special Ozoni.

Most Japanese go to Shrines and Temples during Oshogatsu in order to pray for health, prosperity, success for business, passing exams for school, and to meet their soulmate. Also, some Japanese go to the sea or to the mountain to watch the first rising sun during Gantan.

Some Japanese people also set their year on New Year's day. They believe that the way you start the year sets the tone for the whole year. Therefore it is important to spend that period well, treat oneself and also behave well.