Golden week (GW) is often the longest vacation of the year for Japanese workers. It is also one of the nicest time, weather-wise, tucked between winter and the rain season (which itself precedes scorching summers). A lot of Japanese choose to travel (it is also a good time to go shopping). Hotels and resorts are packed in Japan at this time of the year and flight ticket prices at their highest – definitely not a good time for you to come to Japan. Japanese people also like to go abroad, Hawaii and Guam being two very popular overseas destinations.

What is celebrated during Golden Week?

As we mentioned once in this space, there are a lot of public holidays in Japan (likely to compensate the lack of annual leave). At least one each month (except for June). In May, there are 3. That, plus April 29 make the Golden Week, provided one takes off the working days in between.

April 29: Day of Shōwa (昭和の日 Shōwa no Hi). The Shōwa was the era of Emperor Hirohito, whose birthday was April 29. He reigned from 1926 to 1989. It is the opportunity for Japanese people to reflect on what happened during these trouble times for Japan (and the world).

May 3: Constitutional Memorial Day (憲法記念日 Kenpō Kinenbi). It celebrates the constitution of 1947 that is still in force to this day.

May 4: “Green Day” (みどりの日 Midori no Hi), its name officially meaning the celebration Nature. That day was originally supposed to celebrate the aforementioned Emperor who loved nature.

Regardless of the meaning of these holidays (beside May 5, many Japanese do not know exactly what day is what), if you ever live in Japan, you will undoubtedly understand that GW is one of the best times of the year. 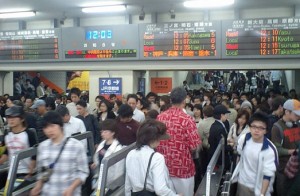 Golden Week is a busy time … for travelers

If you get lost in Japan