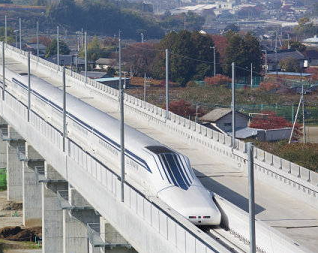 This should be news to no one: Japan is always at the cutting edge of technology. In yet another evidence of that, the new Japanese shinkanzen (bullet train) – called “Maglev” for “Magnetic” and “Levitation” as it is propeled by electromagnetic energy – broke the world speed record at 366 mph (589 km/h) this april.

The train will rally Tokyo and Nagoya in less than 40 minutes (less than half the time it currently takes). But the main purpose is obviously to export the technology.