Would you leave your kids in the “hands” of a robot?

We have had the opportunity to say it a few times in this space: Japan is facing serious demographic issues.

One way to solve the situation is immigration (part of it being making it easier for foreign students to come to Japan, thus the Global 30 initiative and the “300,000 foreign students” project – click here to learn more about our affiliated Childcare Vocational School).

Another way is something that Japanese are known to be really good at – rightfully so – : robotics. We are only scratching the surface in this field. But, already, Japanese are considering using androids for childcare.

Near us, in Chiba, searchers will launch “RoHo care” this summer (on a trial basis only – the objective is to have it “live” in 2018). “RoHo” stands as a portmanteau for “Robotics” and “Hoikujo”, “day-care” in Japanese. According to the makers, one staff with 4 androids will be able to handle 60 kids. But that is not the last of the benefits.

As one can imagine, the robots will contain a very large database – think all the Teletubbies series and thousands of hours of equivalent programs.

And, of course, it will be able to read stories endlessly and tirelessly (what a relief for many childcare workers that must be).

The robot will feature a screen on its chest for the learning time. And that's far from all. Its eyes will be webcams, to enable parents to see what is going on at all time.

Thanks to a very efficient Artificial Intelligence and facial recognition, the robot will adjust to each child's personality and needs, as well and their emotional states of the moment.

A smartphone application will enable parents to get a full report on their kids' days, including what they ate and their various activities. 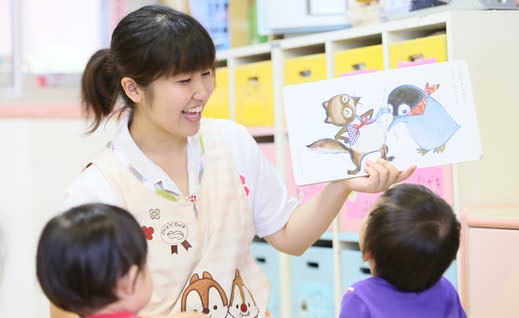 Robots to replace childcare workers: nothing can replace human interaction but should be ignore the benefits of robots?

We have not met “in person” those androids. Extensive tests have been conducted to make sure their appearance match infants' tastes. A humanoid appearance was found to scare children.

So, instead of that, it will look like a blob – à la barbapapa – with, of course, a huge smile on its “face”. But it may not be smiling at all time. Its color will change depending on the context. Red to instill authority. Blue come nap time.

The new generation will be the generation of robots. Our kids/grand-kids will grow up among robots.

What used to be science-fiction has come to realization (we will not dwell here on whether this is “good or bad” … Of course, no robot will replace human interaction … But the benefits of robots are hard to ignore … And does Japan have the choice? Vast question …).

More and more initiatives like this one will fully integrate many technologies at the same time: AI of course, but also face recognition, bioinformatics and, among others, GPS and drone-technology.

RoHo will indeed be assisted by drones in charge of the kids' protection (during walks and to monitor the childcare premises at all times).

Rumor goes saying that the drone may actually be equipped with odor sensors … We don't know yet if the android will change diapers too. Now that would definitely be progress, wouldn't it?

Driverless Cars: The Future is Now