HomeBlogStudying in a Japanese University

Studying in a Japanese University as a Foreign Student | Motivist Japan

We often receive inquiries from people willing to study in Japanese universities. Our first reaction is to ask them: “How good are your Japanese language skills?”. Most often, the answer to that question is “I cannot speak Japanese”. Those aspiring students-in-Japan are seeking university programs in English indeed.

Japan, as an island, with its unique culture, is a country that is still in the process of opening up. Facing serious demographic issues, and well aware of the globalization, the Japanese government has pledged to attract more foreign students. By the year 2020, there will be 300,000 foreign students in Japan – more than double the number of students now. Another initiative taken by the Ministry of Education is the “Global 30” project.  Thirteen Japanese universities offer degree programs in English, in various academic fields. Among those universities are Sophia University, Waseda University, The University of Tokyo, to name just three (see the list below). What do those thirteen universities have in common? They are all Elite universities. The Japanese equivalent of, for instance, Yale, Harvard, Princeton, Stanford in the US, or Cambridge, Oxford in the UK. In other words, admissions are for the cream of the crop. What is left for the vast majority of us? 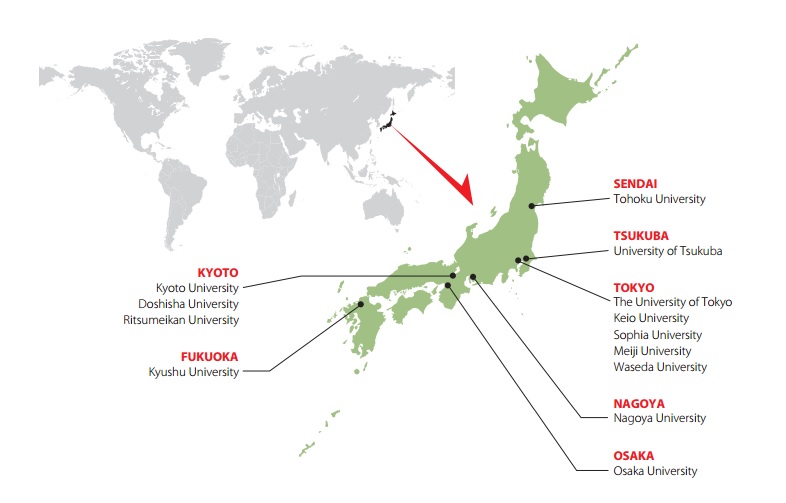 The 13 Japanese universities that participate in the Global 30 project

When one wants to study in an English-speaking country's higher education, they first learn English, with the aim to get good scores at TOEFL, IELTS or other required English tests. Then, they can apply at universities abroad. It does not work that way to study in a Japanese higher education institute.

Studying in a Japanese university requires first to learn the language in Japan.

To study in a Higher Education Japanese institute, one must first learn Japanese in Japan

As we mentioned before, only a limited number of Japanese higher education institutions provide full programs in English. The vast majority of them require a JLPT level N1 or N2. Basically, those levels are fluency in Japanese (some people say that most Japanese could not pass N1 themselves!). But it is very difficult to get valuable Japanese language teaching in Western countries. There are Japanese language schools all over the world. But the teaching there often leaves a lot to be desired. Even when the instruction is of high standards, it is not sufficient to become fully fluent, to comprehend the extent of the Japanese language and culture. For example, the non-verbal cues are important to understand for one to be able to communicate well in Japanese. Though this is true for any language, more than any other language Japanese requires full immersion. Some scholars say that students of Japanese can learn in one year in Japan what they would otherwise learn in 10 years if they had stayed in their own country. In other words, the only efficient way to learn Japanese is to learn in Japan, in a language school.

Therefore, if you intend to study in Japan and make the most of its excellent education system and great way of life, it is critical that you plan at least one year to study Japanese in Japan.

Questions to Ponder Before Studying in Japan

What Positions for Part-Time Work in Japan?